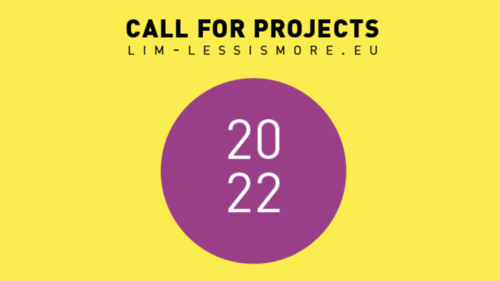 LIM | Less is More, the European training programme for first to third feature development, powered by Creative Europe — MEDIA and the alliance of ten European countries*, launches its new 2022 Call for Projects.

And LIM's team, led by Le Groupe Ouest - the European Film Lab established on the coast of northern Brittany - is creating its own revolution:

At the heart of this new label, there is the fundamental idea that using the concept of limitation is not only a matter of budget, but becomes a necessity both to enhance creativity and to rethink how independent cinema is conceived in a time of deep ecological and political concern.
LIM is conceived as a platform to help talented new filmmakers sculpt the films that humans of our times need.
LIM's battle points at the necessity to work collectively on generating meaning in a context of void created by the religion of quantity & consumption.
LIM's team wants to continue to open new types of collaborations between writers and filmmakers to help independent cinema open new horizons of humanism.

An Online Introductory Presentation of this new Call will be held on Tuesday 14 September 2021 - 5 pm (more info to come soon).