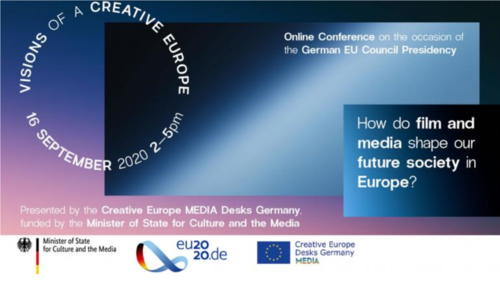 Minister of State for Culture and the Media Prof. Monika Grütters opens the conference on the occasion of the German EU Council Presidency, presented by Creative Europe MEDIA Desks Germany. Creative, innovative, diverse - what role do film, culture and media play in our society? This topic will be explored from a variety of perspectives by cultural and media professionals from various fields ranging from music to film and artificial intelligence. The event is funded by the Minister of State for Culture and the Media.

Multi-award winning Icelandic artist Hildur Guðnadóttir has established herself at the forefront of experimental pop music. In addition to the Oscar® for the film music for "Joker", she was named "Television Composer of the Year" at the World Soundtrack Awards in Ghent in 2019. She talks about how Europe sounds at the moment and how it could sound in the future.
How can film and music as the "heart and soul of Europe" help to overcome the great challenges?

Johanna Koljonen is a media analyst and author of the Gothenburg Film Festival's annual "Nostradamus Report" which looks into the near future of the audiovisual industry. In an interview she presents the current report and gives an update for post-pandemic times.

Artificial intelligence is the topic of Christian Mio Loclair, Creative Director at Waltz Binaire, the laboratory for creative innovations based on new technologies, data and innovative software experiments. He explores the question of what impact AI has on society, culture and the arts.

With its call "Cinemas as Innovation Hubs", the European Commission last year called on cinemas and other cultural institutions to jointly develop ideas for the creation of innovative cultural centers for rural regions. Susa Pop from the Public Art Lab, Carolin Huder, Kammerspiele Kleinmachnow and Gorana Barišić Bačelić, Fortress of Šibenik present their project "Connecting Cinemas in Rural Areas".

Teddy Award winner at the Berlinale 2020: "No Hard Feelings“ by Faraz Shariat was produced by the Jünglinge Filmkollektiv. Declared credo: The young European film has to tell queer, diverse and above all specific stories about living together in our societies. The two leading actors* Banafshe Hourmazdi and Benjamin Radjaipour talk about marginalized voices in German film and what has to change in order for previously overlooked perspectives to find their way into the film world.

Sabine Verheyen, Chairwoman of the Committee on Culture and Education (CULT) in the European Parliament, comments on EU cultural and media policy.

Lucía Recalde, Head of the MEDIA Program of the EU, gives an update on CREATIVE EUROPE under the motto New Stories, New Collaborations.

Moderator AC Coppens: As founder of "The Catalysts", AC promotes the development of innovative actors and thought leaders in the creative industries at the interface of digital technology and creative content.

Please find the event's presskit down below.

The event will be held in English.

Please Note: Times of this programme may be subject to change

Link to the Minister of State for Culture and the Media